July 1, 2021 · 7 min readChinese Learning
Chinese numbers are an essential part of day-to-day life, so it makes sense that they're one of the first things you'll learn as a beginner!

Like any language, the Chinese system of numbers can be intimidating at first glance. Thankfully though, it's actually much easier to count in Chinese than you would think with its complicated-looking characters.

Here’s everything you’ll learn in this guide:

What are the numbers 1 to 10 in Chinese?

Let's start with the basics numbers before moving on to bigger ones. Numbers from 1 to 3 are simply strokes, you can't get any easier than that!

Although the rest is not as straightforward, they are not difficult to write and recognize.

TIP Click on the hanzi in the table for more information about the word and how to write it. 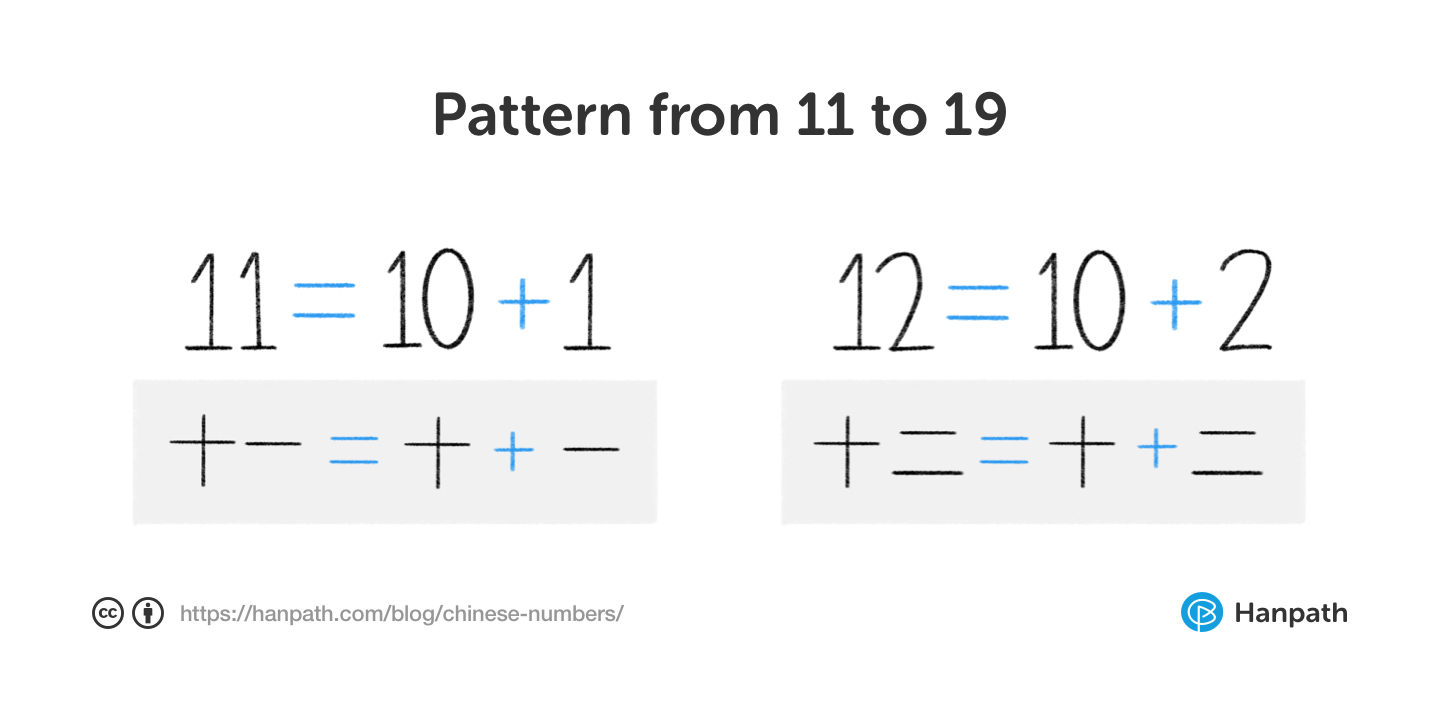 Remember when I told you numbers in Chinese are logical? 🙂

The next number is 二十 (èr shí) which is literally "two ten". This second pattern works for all the tens. 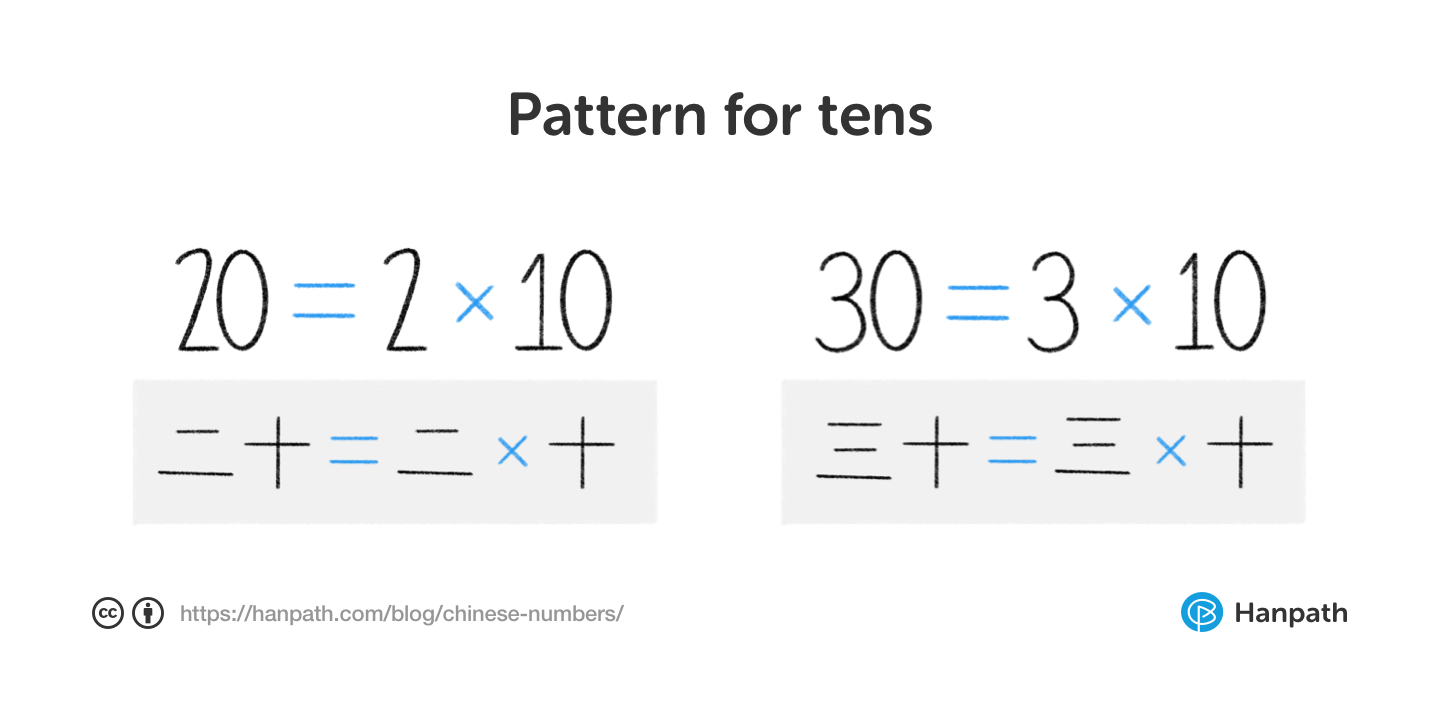 It's as easy as combining the two patterns like this: 二十一 (èr shí yī)

Can you guess 47 in Chinese?

TIP Notice that 一百 is written in pinyin "yì bǎi" instead of "yī bǎi". There's a rule to change the first tone of "yī" to a fourth tone "yì" when it's in front of a third tone like "bǎi".

How do you count over 100 in Chinese?

Beyond the number 99, you need to use measure words (characters) that represent hundreds, thousands, tens of thousands, and so on. It is very elementary to understand, but if you consider these characters as numeral measure words, learning Chinese numbers over hundreds and thousands gets a way easier!

The big numbers are grouped differently than English, so one million would be written as 一百万 (yì bǎi wàn), which is literally "one hundred ten thousand."

Here's an example from a thousand to a billion: 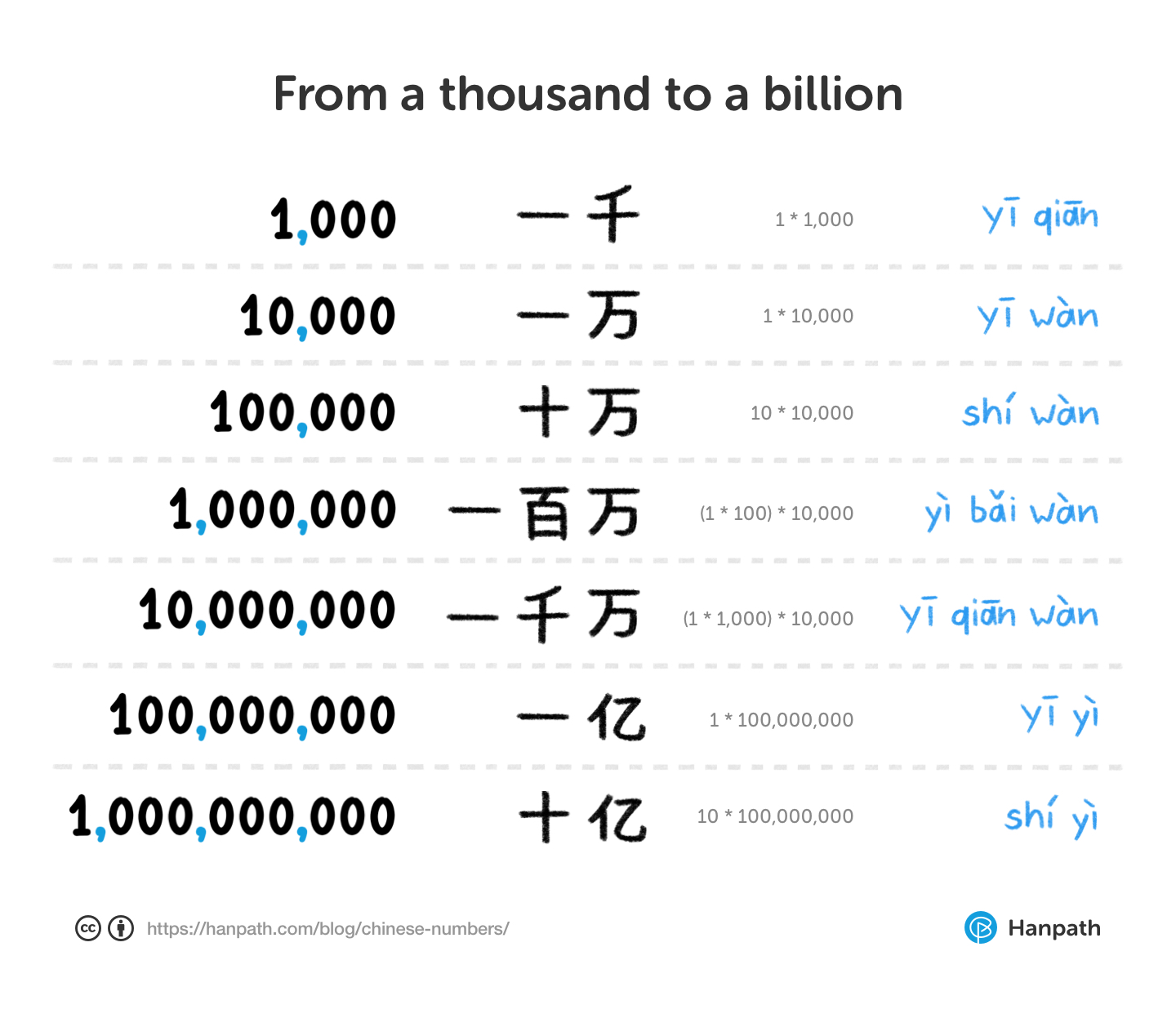 That's a lot to process! Hold tight, there is still one more concept I want to show you: how to deal with zeros.

The 3 rules of zeros

Zero in Chinese is a bit tricky as you'll see. Let's take the number 101, can you guess how to write it? You probably answered 一百一 (yì bǎi yī), but it's wrong.

The correct answer is

As you can see, you have to put a zero 零 (líng). When should you add it? Simply follow these 3 rules, and zeros in Chinese will have no secret for you.

1. Don't put the numeral measure word when it corresponds to 0

In other words, when you have a zero in the place of a measure word like 十 or 百, you replace it with 零. For example, the number 708 is 七百零八 instead of 七百十八.

2. Omit the zero when it's at the end of a number

For example, 360 is written 三百六十 (sān bǎi liù shí). You don't have to put in an extra zero because it's already part of the measure word.

3. Keep only one zero if you have more than one in a row

When to use 两 instead of 二 ? 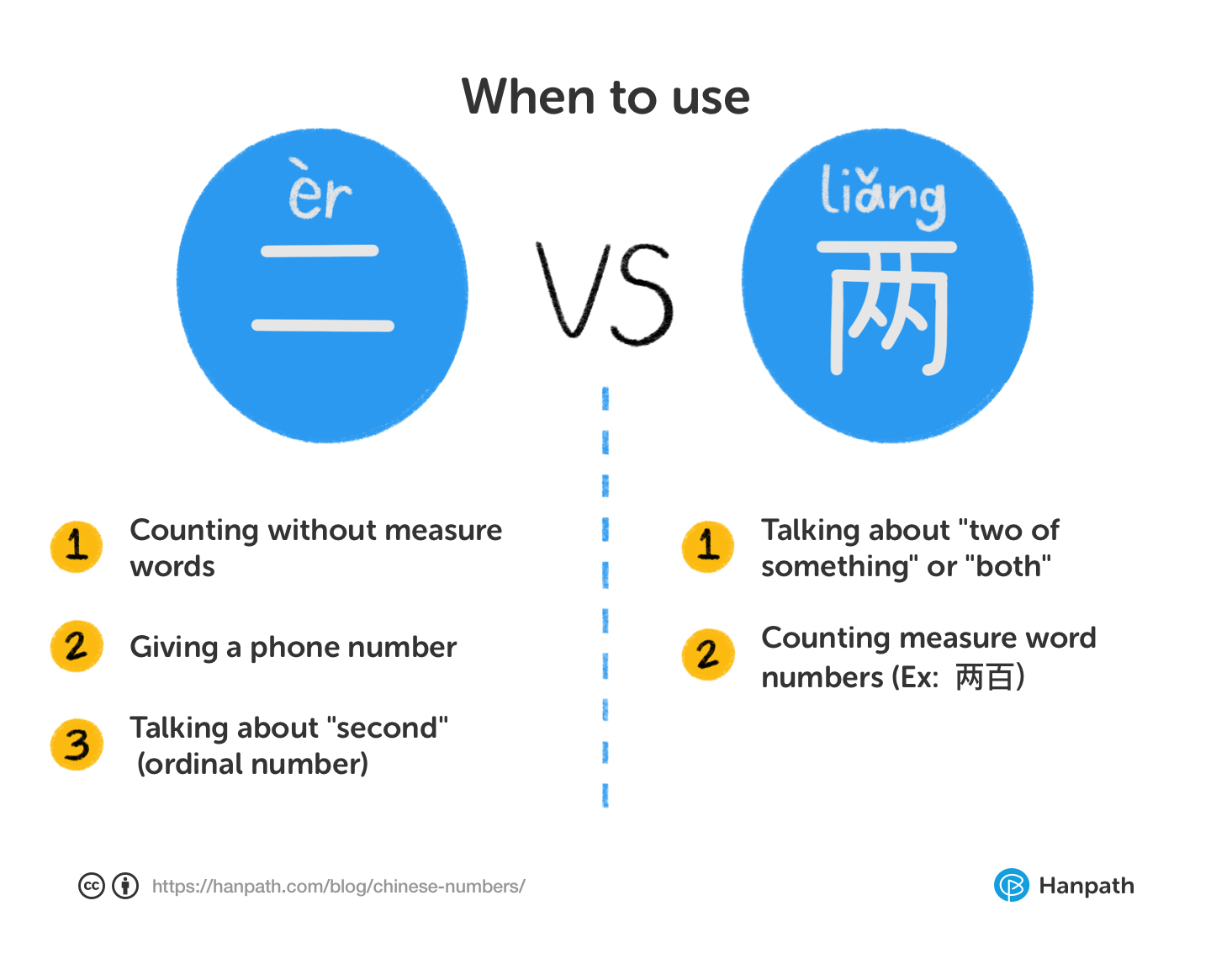 In Chinese, there are two words for "two": 二 (èr) and 两 (liǎng). It's easy to be confused by which one to use, so let's find out when to use them.

How do Chinese count on hand?

In China, hand gestures are often used to represent numbers.

If you find yourself ordering food in Chinese, knowing them can be quite handy! The picture below will teach you the gestures from number 1 to 10. 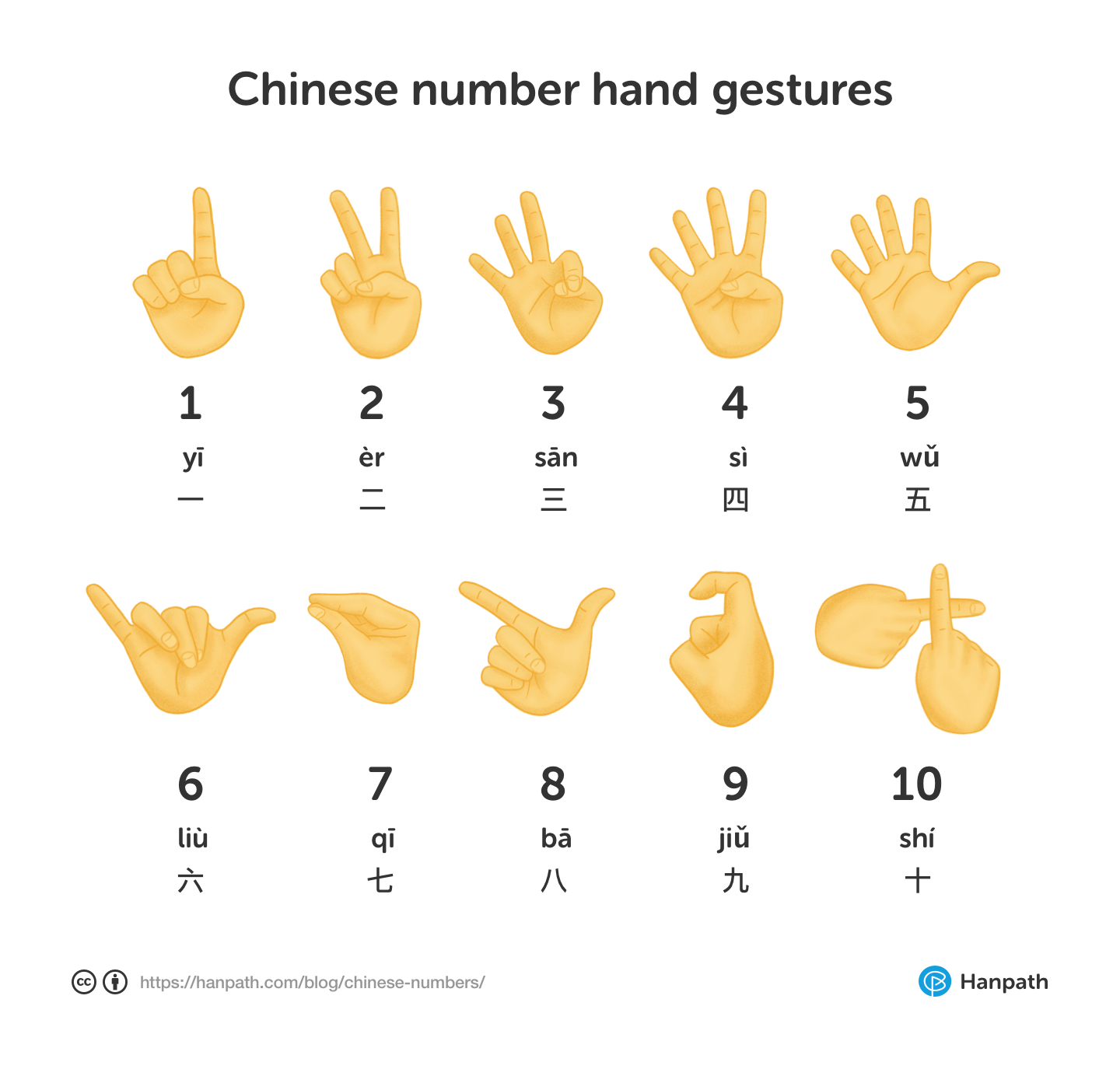 How do you say phone numbers in Chinese?

This guide would not be complete without mentioning how to say phone numbers in Chinese. When giving a phone number, you just read the digits from 0 to 9. It's that simple! All individual numbers are spoken, making it easy to remember.

One important thing to note is the use of the number one in Chinese phone numbers. When referring to phone numbers, the "number one" is not spoken as 一 (yī), but instead, 幺 (yāo) is used.

The reason is that 一 (yī) and 七 (qī) sound very similar when spoken quickly, hence the introduction of 幺 (yāo) to avoid any confusion.

Chinese numbers aren't that complicated, they are quite logical. In this guide, you have learned how to count from 0 to a billion, pretty impressive!

Just remember the few rules and understand the numeral measure words and you will be able to use numbers in daily life with ease.

Haley is a voracious traveler who loves to explore new places and cultures. She studied business at Tongji university in Shanghai where she volunteers for the international department to help foreign students learn about China and its language.